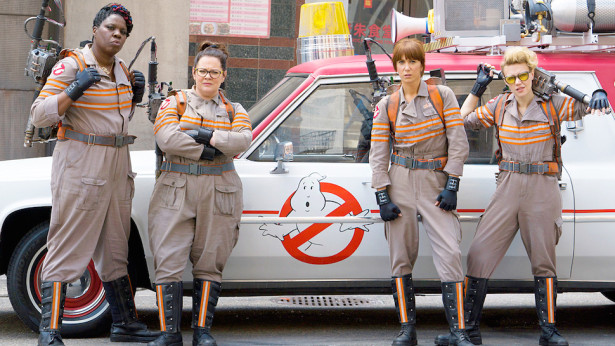 SO after all the hype and grumbling on the internet about a re-booted all female led Ghostbusters movie, the question is…was it really that bad?

Now much of the issue people had with even considering remaking this classic spook flick was that the lead roles were going to be played by women, heaven forbid.

And yet, most of the original cast either had a cameo role in the film, or actually helped write the thing, and if they weren’t available to be there on set they were still there (pardon my pun) in spirit.

If anyone should have a problem with switching to girl ghost busters, surely it would be these guys but they actively endorsed the film.

Now the next thing many grumbled about was the blatant sexism directed toward the excruciatingly handsome and comically dim witted male secretary Kevin (Chris Hemsworth).

But of course women obviously have no idea about being treated as mere eye candy, and should surely get back into the kitchen and leave the real tough stuff to the big boys, right?

Is this a movie about feminism being taken too far?

Should we even be allowed to tinker with such classic film history?

Of course, it could just be a sign of the times, and women are no longer just seen as sexy sirens or screeching banshees any more.

Perhaps it is time to just admit that equality isn’t just a mere idea held by radical feminists, but an actual fact that has changed the entire western world since the original film came out in 1984.

Enough about all that as what you really want to know is how the movie measured up with the franchise.

The movie isn’t a shot for shot remake but is a total reboot with the heavy nods to its predecessors made in a completely self-aware manner.

Kristen Wiig replaces Billy Murry’s smart mouthed parapsychologist Venkmin character, with a goofy scientist who loses her job when it is revealed she helped write a book about ghosts and the afterlife with her former friend Abby Yates played by Melissa McCarthy.

They are joined by relative new comer Kate McKinnon as Jillian Holtzman, a quirky genius with a great love of gadgets who practically steals the entire show.

Then along comes comedian Leslie Jones as the streetwise token black lady with her character Patty Tolan, who balances out the mostly white cast just enough to score a few points for multiculturalism.

The villain turns out to be some nerd in a flashy hotel basement with a grudge and some funky doodads that can summon ghosts and wreak havoc, giving our ghost busting gals something to bust in order to prove their mettle, and that they aren’t in fact just a bunch of crazy ladies with back packs.

The special effects are far superior to the original, as one would expect after decades of fine tuning CGI, and Slimer finally gets a girlfriend.

This is not the end of the world for macho men flicks it is simply a fun tongue-in-cheek blast of humour, which crosses the streams and many stereotypes all at the same time.

Leave your indignation at the candy bar and just go and see this uproarious clash between some ghoulish apparitions and groovy girl power.

And stay to the end for a sneak peek at potential sequels to come.