JOONDALUP detectives are continuing their investigation into an alleged assault in Butler on Thursday, April 19.

A WA Police spokesman said during the altercation, a man approached another man in his 40s from the crowd of on-lookers and punched him to the head a number of times.

The spokesman said as a result of the alleged assault, the victim was concussed and a received a fractured cheek bone.

“The man casually walked away crossing Kingsbridge Blvd and left the scene,’’ he said.

The man was described as light skinned, about 180cm tall with a red-ginger beard, short red-ginger hair that was shaved on the sides and back and of solid build.

He was wearing a black t-shirt with a circular white motif on the back that had an anchor with wings in the middle of the motif and grey tracksuit pants. 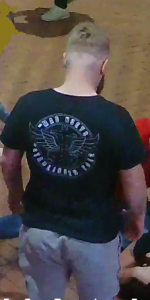 On April 25 Joondalup detectives charged two men following the fight in Butler, which happened about 11.45pm when police allege two men were in a physical altercation with two other men outside of a tavern near the intersection of Kingsbridge Blvd and Wadhurst Rd.

A police spokeswoman said police will allege that during the altercation one man was struck with a knife, resulting in a puncture wound to his abdomen.

She said the injured man was taken to Joondalup Health Campus where he received emergency surgery.

“Another man was admitted to the hospital with facial injuries after it is alleged that he was assaulted by the two men,’’ she said.

A 25-year-old Clarkson man has been charged with grievous bodily harm and appeared in Joondalup Magistrates Court.

He was remanded to re-appear In Joondalup Magistrates Court on  Monday, July 2.

A 24-year-old Hocking man was charged with an act intending to cause bodily harm and was due to appear before the Perth Magistrates Court on Wednesday, April 25.