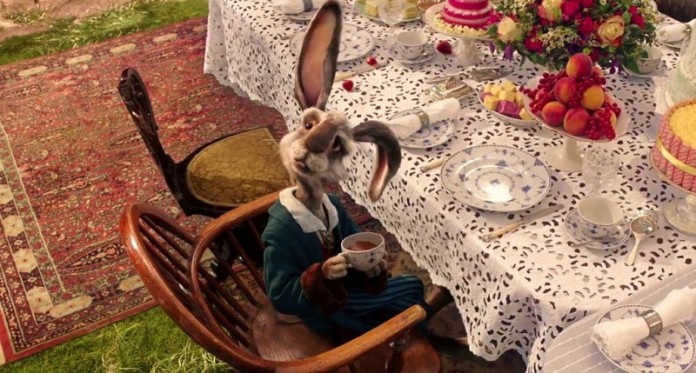 The roaring financial success of the first Alice adaptation in 2010, as well as its handful of Oscar winnings made it very likely we would again find ourselves chasing the rabbit down that magical hole to Underland again.

This time Tim Burton has stepped back to the role of producer and handed over the reins to director James Bobin, who manages to retain all the whimsy and colour of the first movie, while giving us a more grown up Alice and a new story about the importance of family and forgiveness.

All the original characters have returned, including a weathered Johnny Depp as the Mad Hatter (sporting more make up than ever before), and it feels like greeting old friends.

Here we meet Alice (Mia Wasikowska) as a strong young woman who is captain of her ship the Wonder, sailing the high seas and proving once again her belief that nothing is impossible.

But upon her return she meets an old foe Hamish, the man she scorned in the previous film.

Hamish has taken the time she was away at sea to manipulate her family’s fortunes, putting Alice in a position where she has to choose between taking care of her mother, or following her dreams.

In her frustration Alice flees the situation only to get herself lost chasing a blue butterfly she finds flittering about the halls.

Of course, this is none other than Absalom the blue caterpillar transformed after the first film, and it is a wonderful treat to hear the voice of the recently passed Alan Rickman reprising the role; indeed the film is dedicated to the magnificent man.

When the butterfly flies straight through a mirror, Alice instinctively knows what she will find on the other side and follows.

She finds her old friend the Hatter is not quite himself anymore, and is encouraged by the White Queen (Anne Hathaway) and all her other old friends to go on a journey to capture the device known as the Chronosphere from time himself (personified by an enigmatic and very steampunk Sasha Baron Cohan) to go back in time to save the Hatter’s family from the Red Queen (Helena Bonham Carter).

Now a lot of reviewers are being quite harsh in their critiques of Alice Through the Looking Glass, indeed there is no mention of the Walrus and the Carpenter at all in this version, but I just can’t agree with them.

I found the movie charming, heart-warming and visually spellbinding, and the addition of time travel a masterful bit of re-imagining.

Alice grows from a strong young woman into an even stronger young lady, who proves nothing is impossible yet again, and the lessons learned make her a role model for all young women in an era when being pretty and vapid seems to be all it takes to succeed.

The Red Queen even manages to get over herself and become something more than a petulant child chopping off heads.

I think the viewers should give this beautiful film a chance and come to their own conclusions as Alice Through the Looking Glass is a delightful dreamy adventure that deserves more affection than it is receiving from bitter critics, who maybe need a bit more magic in their own lives.