THE WA Police Force has suspended the use of 11 new mobile speed cameras after the new cameras have been shown to produce false speed readings in some circumstances.

A WA Police spokesman said testing prior to the roll out of the new Jenoptik S350 laser speed cameras in January did not identify the issue, which the manufacturer was now working to resolve.

The spokesman said in exceptional circumstances, when vehicles were travelling in a particular configuration, the new cameras have produced false speed readings.

“Of the 53,000 vehicles detected speeding by these cameras since January, 20 cases are known to have been affected,’’ he said.

“A manual screening process identified and removed 19 of these cases with no infringements issued.’’

But police have confirmed one case slipped through the screening process.

“In this instance, the driver was charged with a hoon offence and the vehicle surrendered to police.

“Prior to appearing in court, the driver disputed the speed reading and when the case was reviewed by police, the anomaly was identified.

“The vehicle was returned to the owner and the charge withdrawn. 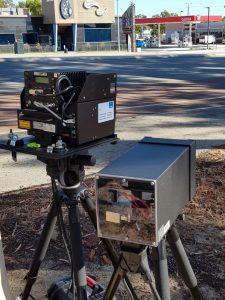 State traffic commander Scott Higgins said a review was being conducted of infringements previously issued from the affected cameras.

“We have checked all infringements resulting in vehicle seizures or court proceedings and we are satisfied these have been correctly issued,” he said.

“All other infringements issued by the new cameras are now being manually validated to ensure no one else has been affected.’’

He said the issue did not affect the remainder of the mobile camera fleet, the fixed cameras, the point to point system or the speed-red light cameras.

Traffic enforcement will be maintained with the use of recommissioned mobile speed cameras until the upgrade is resolved and the new cameras are re-certified.