ON Saturday, November 11 some residents observed a minute’s silence at the memorial in Yanchep National Park.

Each year on this day, Australians observe a one minute silence at 11 am in memory of those who died or suffered in all wars and armed conflicts.

On Thursday, November 9 the Department of Defence said there would be PC-9 flypasts just before 11am in support of Remembrance Day commemorations over the Merriwa and Wanneroo memorials.

The RSLWA Poppy Ladies have started a project to knit or crochet 62,000 poppies – representing the Australians who died at war or were held as prisoners of war during WWI – in time for the 100th anniversary of Armistice Day on November 11, 2018.

The poppies will be displayed on the lawn surrounding the State War Memorial as part of the centenary celebrations for Armistice Day, which is also known as Remembrance Day.

Before Remembrance Day Veterans Issues Minister Peter Tinley said he would pay his respects to the men and women who sacrificed their lives for Australia in wars and armed conflicts.

He urged everyone to on the day to show their support for those who had represented Australia in the defence forces by wearing a red poppy. 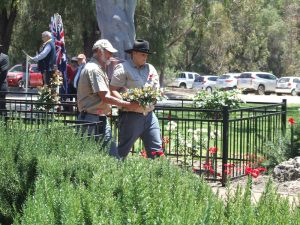 Coinciding with Remembrance Day, a Nagar Kirtan (Sikh parade) was held on Saturday in Forrest Chase to celebrate the 548th birthday of Guru Nanak, the founder of Sikhism and on whose teachings the religion is based.

Citizenship and Multicultural Interests Minister Paul Papalia said it would also serve as an opportunity to commemorate and honour the Sikh servicemen and women who served with allied forces in both World Wars.

“From the 19th century, when Sikh cameleers became a vital lifeline for the new rural economies of regional Australia, through to their selfless services in the armed forces, the Australian Sikh community have been major contributors to the development of this nation,’’ he said.