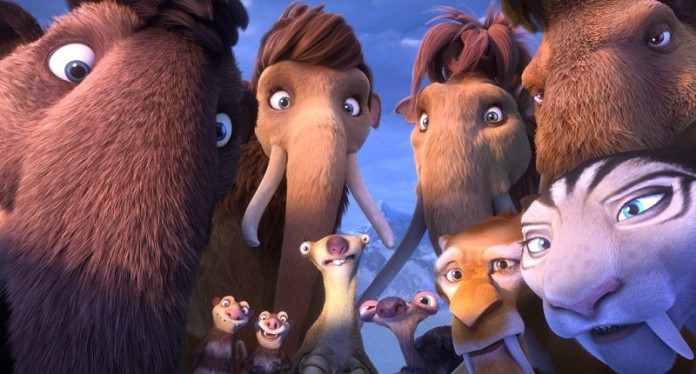 TO start, let me just stay Collision Course is a fifth-quel even I didn’t see coming.

This franchise has tracked well for the first three movies, but if the lack of internet buzz about this edition says anything it is perhaps that film-goers may be a little exhausted.

This is slightly sad, because while the movie was totally unnecessary and weird it wasn’t totally awful.

Lovable furry lugs Manny and Syd have floundered their way through one earth rumbling catastrophe after another, and Manny has been lucky enough to not only bag himself a very understanding wife mammoth, but also brought a lovely daughter in to their icy world.

And yet, that acorn loving Scrat is still scrambling about trying to find a spot to stash his nut, only this time (for some inexplicable reason) he stumbles upon an ancient frozen space craft and sets the end of the world off…yet again.

Right about the same time Manny totally forgets his anniversary and tries to cover for it with the surprise sky-full of shooting stars caused by none other than Scratt pin-balling his way through the heavens.

Are you already starting to scratch your head?

Yes I’m not surprised; it doesn’t really make all that much sense.

We have had small humans to rescue, floods, dinosaurs and pirates, so why not take that mad leap into space eh?

I’m guessing someone had a bit of extra dough to throw away and just said to hell with it, let’s take this series out with a freaked out bizarre bang.

To help achieve that a bunch of floating crystals keep old and weird lamas young and groovy, a funky bunny manages to woo cantankerous old Granny sloth, and even smelly old Syd the Sloth meets the woman of his dreams.

It’s all just a big hippie love-fest with the same old threat of extinction that we have all come to know and expect, with the addition of some kind of alien intervention (except for poor old Scrat…he’s lost in space).

I cannot explain why I liked this film as it was just strange.

But I can say that with all the years perfecting their craft the visuals are far better than the original and that is saying something, even if it seems to have been written by some people locked in a room with some merchandise and a bucket of LSD.

I joke, but really, it’s so far from the first film that it could have been a fan-fiction.

So, to sum up, Ice Age 5 is a disaster piece that the world probably could have done without, but some of us get a warm fuzzy even when the world is burning.

If you’ve already dragged the kids to see Dory get lost again, maybe you might like a few more hours of peace and take the littlies to see this oddball Ice Age end to a very long saga and fill up on some popcorn in the dark.