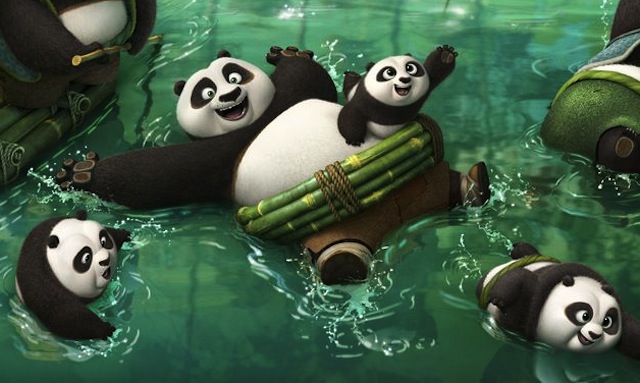 THE first break out comedy Kung Fu Panda movie was dynamic and inspired; a fantastic self-realising journey for a pudgy panda that goes from gluttonous bumbling oaf to the Dragon Warrior with the help of the furious five martial artists and Shifu (Dustin Hoffman) his red panda Kung Fu Master.

And the second film delivered just as much fun and adventure as the first with a slightly darker nemesis to conquer.

This third instalment perfectly rounds out the trilogy with our beloved Po discovering his lost panda roots and developing his Kung Fu prowess to finally find his inner strength; the belief in himself.

An ancient antagonist is revealed in the afterlife; Kai a supernatural yak who steals the Chi of his advisories to become ever more powerful, breaks his way back into the mortal world.

After years in exile, he returns with an army of jade warriors with the intention of absorbing all the powers of all the Kung Fu Masters, and once again the only one standing between good and the utter destruction of this new evil force is our dear Po (Jack Black).

Po is visited by his long lost father, and realises he is not the only one of his kind.

An entire village of rolly-polly pandas are living out their peaceful existence on top of a mountain, far from civilization, in a lush and beautiful valley of harmony and happiness.

Po and his biological father travel with his adoptive father (the dumpling restaurateur goose Ping) to this secret village to discover the ancient art of manifesting the mystic powers of Chi in an effort to take on Kai and save the world yet again.

Kung Fu Panda 3 delivers much of the same light hearted humour without merely recycling the same old jokes, but goes further to reinforce the theme of salvation under pressure.

With the side story of the importance of family, a delightful triangle between Po and his two fathers shows love in its many facets.

Of course Po saves the day, but not after great sacrifice and the ultimate lesson of learning to look deep inside to find the magic that is love and belief in yourself.

Once again, we are given yet another wonderful life lesson delivered through the medium of movies, in a time where the world is in great need of a reminder that we all have inner strength, and the powers of good can and will triumph over all that is dark and evil.

If a tubby panda can look within and change the world, perhaps we can all take away this example and try to make the world a better place, one noodle bowl at a time.