In the modern competition driver Mark Greenham and co-driver Steph Esterbauer in their 2006 Mitsubishi Lancer Evo 9 blitzed the two stages at Wanneroo Raceway, winning by 11 seconds and 7 seconds.

The duo also finished fastest in the Ellenbrook street stages.
Greenham said there were lots of first and second gear corners and the four-wheel drive really punched the gear hard and handled them really well.

Peter Rullo and Jimmy Marquet in their 2019 SSC Lotus Exige Targa GT bolted from the get-go, winning the first two of four stages at Whiteman Park but with a car suited to long flowing roads, lost time on the tight, twisty stages at Wanneroo Raceway.
Rullo and Marquet finished the day in second place.

Rounding out the top three a further 22 seconds behind was husband and wife team Bill and Glenys Stagoll in their 2006 Mitsubishi Lancer Evo 9.
John O’Dowd and Toni Feaver showed promise in their leased 2004 Porsche 996 Turbo and finished the day in fourth, a good effort considering that the first time O’Dowd drove the car was on route to the ceremonial start held at Forrest Place.
Will White and Matt Thompson blew their engine the week before Targa West and the crew spent many a late night to fix it in time.

Despite finishing equal fastest on the first Ellenbrook stage, fuel regulator issues plagued them today and it looks like they could be out of contention.
Targa West heads to Mundaring and Kalamunda today, which includes the Zig Zag stage. 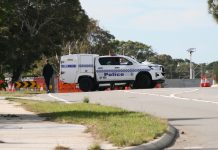