The Eglinton event was organised by Stockland to launch the first stage of a multi-million dollar sports and recreation complex at the beachside community on Saturday, April 30.
Sandilands, who is out with an injury, was a special guest at the event.

Stockland WA regional manager Col Dutton said the developer supplied free Auskick mini footballs to children at the event and Sandilands was more than happy to sign autographs and pose for photos with every youngster who lined up for a meet and greet with the towering 211cm ruckman.

“Sandilands also handed out tips and advice to young fans and cheered on children as they ran through a banner to mark the official opening of the community’s eastern oval, playground, scooter, skateboard and cycle path, plus barbecue and seating facilities,’’ he said.

Mr Dutton said it was a thrill to have Sandilands, the dual winner of Fremantle Football Club’s Doig medal for the best and fairest player, providing inspiration to children from Amberton and the wider community at the event.

“It was fantastic to see all the youngsters having a great time mingling with one of the current greats of AFL at our new complex.

“The children just couldn’t wipe the smiles off their faces.”

Other highlights of the free-family event, which was attended by Wanneroo Mayor Tracey Roberts Butler MLA John Quigley, included a Sports Breakfast of Champions, junior sports clinics in AFL, netball, soccer and other sports, plus sack races and tug of war.

Mr Dutton said the Amberton sports and recreation complex was destined to become the hub of the beachside community.

On completion, the 8.8ha playing fields will include two AFL-sized ovals, which can be used for a range of sports including cricket, soccer and rugby.

“Amberton promotes a healthy and active lifestyle with an array of parks, playgrounds, fitness equipment and walking and cycling paths.

“Stockland also sponsors free fitness sessions during school term at the community as part of the Live Life Get Active initiative.’’ 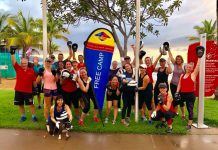 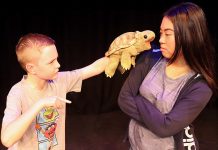